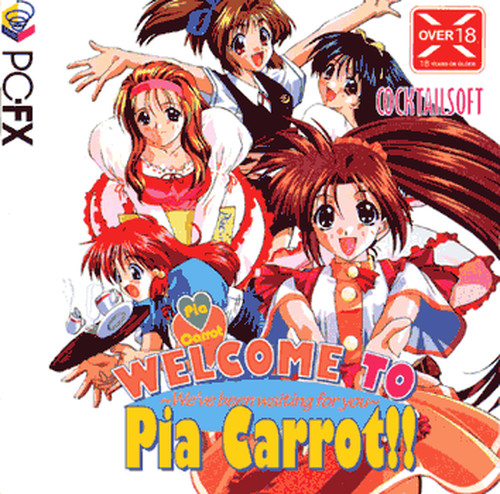 Overview:
You play as Yusuke, a young 18-year-old just finished with High School. You plan on spending your last summer with your best friend Daisuke. However, previously you made a bet with your father, concerning your grades. Your test marks are not desirable, and you lose the bet, therefore you must live up to your promise and work at daddy’s restaurant, the Pia Carrot. What seems like what’s going to be a lame summer of slave labor, becomes the greatest and most memorable summer of your life. What makes things interesting are all the cute girls who work at the Pia Carrot, and those who dine there.

You already know Shouko, a childhood friend of yours and Satomi, a classmate and the girl you have a crush on already, will be working with you. Yet, as the summer goes by the interaction with other girls is intense and you must choose who you want. There are a total of nine girls Satomi, Shouko, Reika, Yukiko, Saori, Airi, Shiho, Kiyomi, and Yukari, to court after.

Some will be easy to win over, others will require much sacrifices, patience, gentleness, perseverance, and chivalry. Your goal is to have one of the ladies “fall head over heels” for you and have her meet you in the park August 28th after you call her. 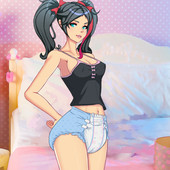 Overview:
You move to a new apartment and your roommates share the same taste as you. You will make choices who influences in your relationship with Sofia.​

Overview:
You have been bullied for too long. At a low point, you find the opportunity to have control over your bully. They’d look very pretty if they were just a little more… feminine.

You play as a protagonist who is feminizing their former bully (who can be a tomboy or a guy), turning them into either your lover, your submissive, or your plaything.

Overview:
You can choose to be a kind, loving master or a sadistic one. You can play as a submissive, loyal slave or a defiant one plotting revenge or escape.​

V0.4 – Start of a new chapter depending on your choices, you end up different places. Small open world. Basic combat added. Prostitution added. 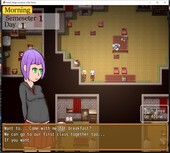 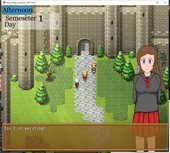 The game currently contains a mixture of time-management and dungeon-crawling, along with the expected
bit of lewdness!​

MAKE SURE TO DISABLE AUTO-DASH in your options before you switch over your saves! The option has been removed and leaving it enabled in your saves causes it to break and you will be slow(nodash) forever.

Updates
– Anya has received new, updated artwork!
– Added a new map! – Currently, only floors 1 and 2, and the grounds are supported, but more to come later
-Added a recipe list – Located in the “Encylopedia” menu option, this lists all your known recipes, as well as the required ingredients for each
– The corrupt church is open! Break curfew and explore the castle after dark when you’re a little more comfortable with combat, but beware. There’s a reason the upper floors are off-limits after dark…
– Added curses- Obtained through events in the corrupt church, these serve as a counterpart to
blessings.
– Added Church Volunteering! Available to almost all(High levels of corruption excluded), these activities are available from the priestess in the regular church during the afternoon. Angels can be called upon to remove blessings from those with unwanted blessings… for a cost
– Added the fire ELEM wing(ELEMF), water ELEM wing(ELEMW)
– Added 4 new classes – Potions 2, Elementalism Intro, Magic Archery 2, and Fire 1 – With 1 new skill and 1 new skill-upgrade
– Added the guide NPC to the office wing outside the dorms!
He has an expanded tutorial available for reference anytime.
-Request scene(x1) added for Anya- using the new animations!
-Party request added for Anya
– Both of these are accessible by “talking” to her after you have seen all 10 scenes of hers.

Changes –
– Added a new, updated boss to the end of the sewers – Higher-difficulty than before!
– Enabled dashing by default and removed the option to turn it off. Everything from the size of the maps to the hitboxes are designed with auto-dash enabled, so hopefully, this reduces issues.
-Added signposts to each floor on the main stairwell.
-Added a mass knockback to the first second of combat, to keep enemies from spawning on top of you while you’re still loading in.
– Adjusted base unarmed attack-Higher range and KB, higher CD
– this applies to enemies as well
-Disabled skill menu access in dungeons
-Added extra text to the end of Anya’s Diary text in her room to show when you’ve reached her last scene

Bugfixes –
– Adjusted desk hitbox in the Tavern PTJ
– Fixed mapping issues where you could glitch into the roofs
via knockback
– Fixed clipping issues in many areas of the castle.
– Fixed milk not depleting properly after pregnancy
-Fixed the blessing of development not properly applying when rolled
-Fixed a path in the sewers with no return